The quality and standards of this early years provision are:

Effectiveness of leadership and management - Outstanding 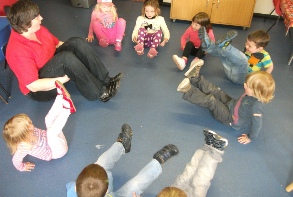 Picking up and repeating the particular language of rhymes is another form of play for young children. They learn rhymes unconsciously and effortlessly; it is not the laborious task it can be for some adults.

By playing with the short texts of rhymes, children explore the mechanics of the English language. They find out how language works and become familiar with the relationship between the 44 sounds of English and the 26 alphabet letters – information which helps them when they begin reading to decode the sounds that make up words. The value of this type of language-play with rhymes in early learning is both underestimated and undervalued.

There is a difference between rhymes and simple poems for young children. Rhymes, in general, are short and depend on the melodic use of the voice to recite the text that includes rhyming words, and the repetition of sounds and words in attractive, easy-to-copy rhythms. The traditional and well-known rhymes are sometimes classified as Mother Goose rhymes or nursery rhymes. Many, like 'Twinkle, Twinkle, Little Star' and 'Humpty Dumpty', are considered part of British culture.

Below are a few useful links that include songs and examples for you to try at home.

Where play begins and learning is fun!